Finally don' swimmin' in the Thames

It seems that I have been wallowing around in The Thames since 23rd April but this is not in fact the case. We are indeed alive and well and living in separate countries (some may say that was a blessing...but not me).

Since my dip in the countries favorite stream we've made our way to Lisa's favorite marina, Pillings Lock. I am currently in France running our extraordinarily unsuccessful campsite business and Lisa has just finished the school term before joining me over here next week but not before I return to see Terri's graduation ceremony next weekend.

The journey back from Oxford was a little more eventful as we got caught up at Hilmorton Top Lock and nearly tipped over in the lock. The wind was blowing us into the lock wall and we got hung up on an exposed brick. Lightning reactions by yours truly saved the day (ever the obliging hero). The bloke on the boat in the parallel lock said that we were still tipping over and I realized that it was because everything inside the boat had slid onto the starboard side. I expected the worst on entry but in the end the only casualty was a broken champagne glass.

The only other event was when I tried to get round Sutton Stop without reversing and ended up in the lone bush outside the houses much to the amusement of those sitting outside the Greyhound who are obviously there waiting for this sort of thing. Nothing dented but my enormous ego. 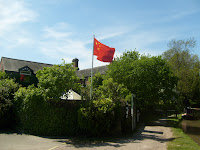 We spent a week or so on the Ashby before leaving for Pillings Lock. This trip was as usual done in five days with a weekend stop over at Trent Lock. Can't remember much about the journey so it must have gone OK with no hicups.

Lisa claims not to have broken anything on the boat since living on her own but judging by past years, I am deeply dubious. It really means that anything that has been broken has been successfully adhered using Sellotape, elastic bands or paper glue. She has even said that she has painted the bathroom. I dread to think.

I may post a report and some pictures of the campsite next if you're good. Are you good? I somehow doubt it.