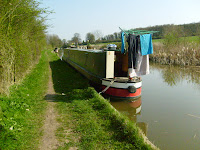 Pickles in the sun
There's coal on the Ashby again (not counting Gosty Hill of course), except that it's not on the boats, it's on the bank. When BW dredged the canal late last year and the first part of this, they placed the puddle clay on the towpath side between the path and the bank. The clay has now completely dried out and amongst the clay can be found black gold. But how did it get there? 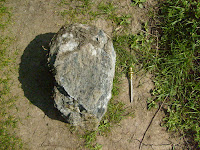 Is it a meteor?
I can only presume that, since the Ashby was used as a coal canal for a couple of centuries, that this coal had fallen off the boats traveling it's length. There are places were there is quite a lot scattered around. For example where here is modern piling there is little to be had but where there has been little modernization, there is lumps of it. But you have got to wonder how it fell off the boats. Were they not as careful as we would probably be with the same load? I have read that boatmen would be fined if found to be underweight. 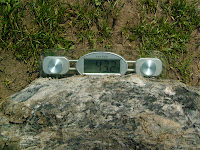 And to prove the weight
When I say there are lumps to be found lumps, I mean very large lumps. I have had reports from another boater of finds that are 20 kg in weight but I have personally found a lump that weighs 43.2kg. To any walker they resemble rocks but they break easily and each half is unmistakable for what it is. 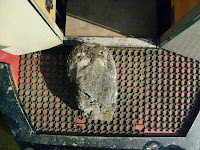 Look at the size of that
It was another boater who put me on to this, nbPlum and Plummy, it's owner. He claims to have heated his boat through the winter on this coal and I find that quite easy to believe. 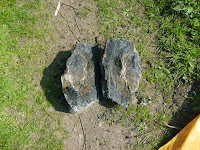 And just to prove that it's not some random rock I picked up.
Is it worth collecting? That depends on how much you appreciate a free thing and how much you value your time. I reckon I could collect a 25kg bag in an hour of the small stuff if you find a good patch. But several large lumps would easily improve that. Seven quid an hour. I admit that I cannot stand missing out on a free thing. I also like to think that I've got a sense of history, several million years in the making, several centuries at the bottom of the Ashby and two days on my boat before being burnt. And I have no pride and am quite happy scrabbling around on the towpath on my hands and knees, getting filthy much to Lisa's despair. 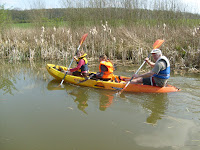 Just out enjoying the sun
This is my 200th post. Happy birthday.

Happy Birthday! I've hidden your cake underneath a 76kg lump of coal...